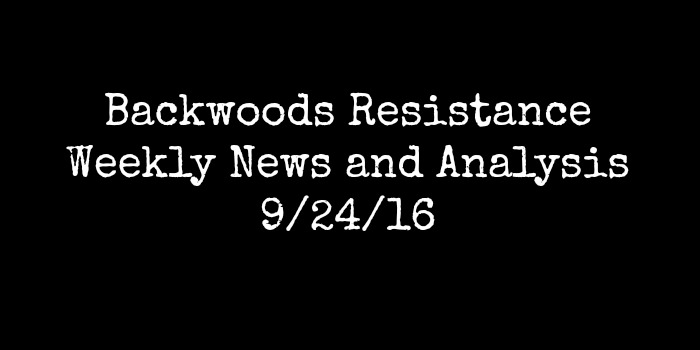 This is the first installment of the Backwoods Resistance Weekly News and Analysis report. From now on every Saturday we will give you a recap of the weeks most important news stories.

What happens when an armed black criminal is shot by a black police officer from a department with a black police chief? Globalist / Communist funded Black Lives Matter terrorists blame white people and riot, of course! Not only that but the media calls the violent mobs “peaceful” and tell their viewers that the gun he was carrying was a book! And to top it off the dead thugs brother tells the world that “all white people are the devil” and leftist presidential candidate, Hillary Clinton, tweets about “another unarmed black man shot by police”

The video clearly shows a gun and not a book. In fact there wasn’t even a book on the scene.

Zero Hedge reports 70% of the rioters were trucked in from outside of the area.

“This is not Charlotte that’s out here. These are outside entities that are coming in and causing these problems. These are not protestors, these are criminals.”

“We’ve got the instigators that are coming in from the outside. They were coming in on buses from out of state. If you go back and look at some of the arrests that were made last night. I can about say probably 70% of those had out-of-state IDs. They’re not coming from Charlotte.”

As these types of NWO orchestrated attempts at civil unrest continue, it becomes more important than ever to stay away from urban areas. It is also another good reason to have storable food on hand. You don’t want to have to make a run into town because you run out of food during one these riots….especially if you are white. You can learn about building up a food storage stockpile on a limited budget At This Link

UN Agenda 21 has been re-branded but it’s goal of rural depopulation continues. Part of the thinking behind driving Americans off the land and into urban areas is because its easier to control people there. Free and independent rural folks have always been a thorn in the side of totalitarians. The USDA, which has been controlled by communists since the 1930s, has been working hard at destroying the heartland and driving whats left of rural America into the future prison camps called “cities”.

What do they have planned for us after we move from the garden to the urban jungle? Alex Newman’s recent article on the UN’s “New Urban Agenda” is worth a read if you’d like a glimpse into the the UN’s hellish vision. We must continue to oppose and fight Agenda 21 / Agenda 2030 at the local level by educating our neighbors and county officials.

Obama Speaks at the UN

Our fearless leader spoke at the UN this week, calling for the US to give up more sovereignty to the International Communist’s global government. This shouldn’t surprise anyone, except us old farts who still remember when they tried to keep their plans secret. Here is what he said…

“…But I am convinced that in the long run, giving up some freedom of action — not giving up our ability to protect ourselves or pursue our core interests, but binding ourselves to international rules over the long term — enhances our security. And I think that’s not just true for us…”

It’s funny, I sort of remember a quote from one of our founding fathers that said, “Those who give up liberty for temporary safety, end up with neither.”

I wish there was some good economic news to share this week, but…

Recession Watch: US Freight Drops To Worst Level Since 2010

The Final Condition For A Market Crash Is Falling Into Place

My tip for preparing for the inevitable economic collapse is simple. Ask yourself a simple question. What are you buying every month that you can’t survive without? Take that list, no matter how long it is, and start thinking of how you can provide those things for yourself. Build local barter economies now. If you buy most of your food, learn how to grow it. I recommend reading Post Apocalyptic Gardening… A Few Things You Should Know.

Scott Terry is farmer, survivalist, and writer who lives in the backwoods of the northeastern United States.You can sign up for the Backwoods Resistance Newsletter HERE and find him on Facebook HERE

Permission is granted to publish my articles on other websites under these conditions.

Article must be copied in FULL, leaving all links intact and a link to the original article.

Scott Terry is farmer, survivalist, and writer who lives in the backwoods of the northeastern United States. You can sign up for the Backwoods Resistance Newsletter HERE and find him on Facebook HERE Republishing Policy Permission is granted to publish my articles on other websites under these conditions. Article must be copied in FULL, leaving all links intact and a link to the original article. You must include the above author bio with a link back to this website 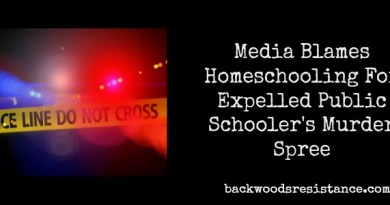 Why You Should Plant Potatoes For Survival

When it comes to survival gardening, there are few crops that hold a candle to the trusty potato. Growing food